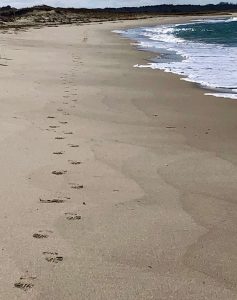 Recently I was walking on the beach, and I noticed all the different type of footprints in the sand.  I saw footprints from hiking boots, sneakers, flat soles, and even bare feet. Some of the footprints were big, some were small, and there were even a few children’s size.  There were also lots of different types and sizes of animal and bird footprints, too.

I noticed many of the footprints kept going in a straight line (or close to it).  This felt as though the person had a destination in mind and each step got them closer to it.

Occasionally, a set of footprints left the sand bunched up at the front of the step. These made me think the person was running on the beach.  Were they exercising? Had they just realized they were late for an appointment? Or were they goofing around with a friend or playing with their dog? 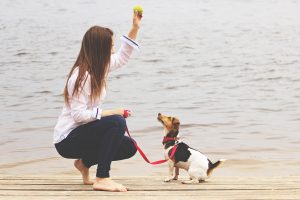 My favorite sets of footprints were a circle of lots of animal prints together. Again, the image I conjured up was of a dog playing ball with his/her human.  They kept dancing around, while the human decided where to throw the ball next! Or, perhaps the dog was playing “keep away” from their human (our dog, Makena, often did that with us!)!

It was fun to let my imagination create stories for some of the different sets of footprints I saw.

As I considered these footprints, I thought about how one leaves footprints every day.  These footprints represent your unique life and the different paths you have chosen.  Just 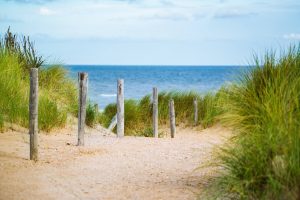 As you stop to think about your life right in this moment, consider these three questions: 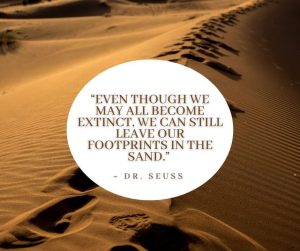 Take a Step Back